To censor or not to sensor. (Localization for North America) 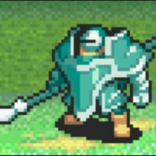