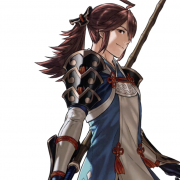 For those willing to marry a 1st gen female... (Spoilers)

Read the description first. Question: Which kid would you rather lose in order to marry a 1st gen girl?