If any Engage characters appeared in the first Engage Banner in Heroes like how they handled with E:SOV & TH in post FEH launch, which first four units do you think they'll appear first? 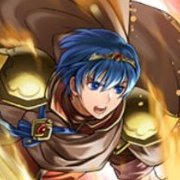