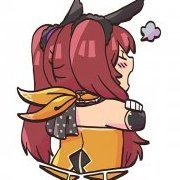 Why I’ve grown to appreciate the power of friendship as a trope more as I get older.

By Ottservia, Tuesday at 02:10 PM in Entertainment